The Ballad of Johnny Candle fingers is a murder ballad pointcrawl set in a dustbowl / weird & wild western town. It's a simple adventure  that you can run in one or two sessions with minimal prep.

There's rural stuff. Creepy stuff. Horrible stuff. Burnt stuff. It's a starting point for a campaign or a nice diversion from an existing one.

Your party will try to track down Johnny Candlefingers, a young boy cursed with terrible power who burns everything he touches. You'll figure out what happened to him, and how to save him. If you can save him.

To fund layout and a print run for the Ballad of Johnny Candlefingers we're looking to raise $250 to cover those costs.

At $500, we'll be paying ourselves a solid rate for writing it.

Beyond that, sales will be helping support other Sealed Library projects. Everyone who buys the digital game for $5 or more via Itch will get a coupon for that as a discount on a print copy.

Joanathan van Wyck as he was known is a young boy who know has the terrible and barely controlled ability to burn things. He's steadily making his way around town razing places to the ground. The town want that to stop and the party are tasked with doing it.

What's in the book?

It's a deliberately flexible setting. You can run it with your deeundee game or Boot Hill, or whatever really. Read through it and think about how you might need to adapt it to your setting and where you'll get any statblocks or whatever from. Don't make it hard work, unless that's fun for you.

There's no statblocks or anything here. That might be a novel concept. It's actually highly likely your game system of choice came with tools for adding systems onto content. It gives you statblocks and spells to apply to things you encounter. It has rules for how long travel takes, and buying and selling stuff. Use them.

But what's the answer?

Johnny Candlefingers is intended to be anti-canon. There isn't a fixed story of how he became what he is, or what you need to do to save him. We suggest you let your players latch onto some tiny clue or idea and develop their own idea and you say yes to it. That way it'll fit in with the setting you play in. It'll be yours.

Made as part of Adventure Jam 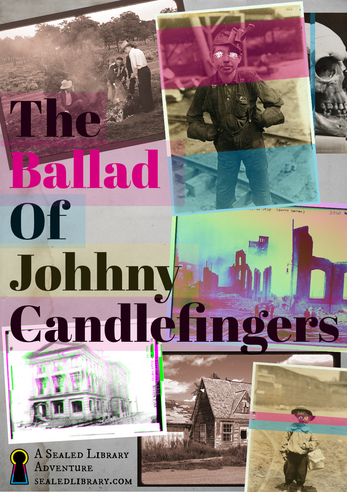 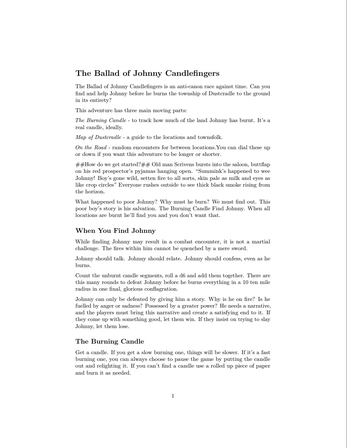