“How DARE you and the rest of your barbarians set fire to my library? Play conqueror all you want, Mighty Caesar! Rape, murder, pillage thousands, even millions of human beings! But neither you nor any other barbarian has the right to destroy one human thought!” ― Sidney Buchman

The Sealed Library is a solo journaling RPG played with a deck of cards, a tumbling block tower and a notebook/scroll.

You are the sole surviving librarian of the greatest library in history. It sits in the centre of culture for an ancient land, now fallen to invaders. They pillage and raze.

The library has been barricaded and you are under siege. What important texts can you move down into the vaults and seal away forever before the barricade breaks?

What will future generations discover inside the Sealed Library?

You are hungry, you are scared, you are desperate. The fate of the combined knowledge of generations is in your hands. You know the chances you will see the outside world again are slim, but this is bigger than you.

The Sealed Library is a game about the preservation of knowledge and the lengths we will go to in order to preserve things that are bigger than us.

You play the only person capable of saving the collective knowledge and culture of your civilisation. You believe you can save it, some of it. The questions are what will you save and how much of it will you save? You even think you might be able to escape afterwards, but that remains to be seen.

In order to download this solo game you must purchase it at or above the minimum price of $8 USD. You will get access to the following files:

Support this solo game at or above a special price point to receive something exclusive.

These are for anyone who feels they need one, no questions asked.

Picked this up with the Bundle for Racial Equality a while back, and managed to stay up til 2am playing this, it is absolutely worth that time

The Sealed Library is a Wretched & Alone engine game about being the last surviving librarian in a great library, working to preserve what texts they can in a library under siege by forces that care little for what it contains.

It's 20 pages, with a little bit of art and a very readable layout, and the visual impression mixes serious, gothic-feeling black-and-white illustrations with very bright, discordant splashes of color. I like it a bunch.

Topic-wise, Sealed Library has a heck of a hook, and I think it might be my favorite of the Wretched engine games for that reason. You are primarily invested in preserving something other than yourself, and that makes it less scary, but also more compelling.

Like other Wretched engine games, you play with a jenga tower, deck of cards, die, and a journal. By the same token, victory is difficult and depends on luck, and the game experience is more about reacting to the prompts you are deal from the deck.

The prompts here are absolute standouts, though. There's a surprisingly warm humor to a lot of them, which caught me off guard, and everything is extremely well-written.

Overall, I would recommend this to anyone who has ever fantasized about saving the Great Library Of Alexandria. If you've played or read other Wretched & Alone games, this one isn't going to do anything mechanically novel, but it's absolutely still a cool experience and very much worth checking out.

I really enjoyed the game! I wrote a review of it here on my blog: https://ialath.com/blog/review-the-sealed-library

This is a wonderful game. The wooden blocks mechanic fits the setting. The premise is perfect for a book nerd like me. It was so much fun to play.

this game changed what ttrpgs are to me. i got a chance to take my time over the journal i was crafting, to give my character (to give ME) a sense of history and bleak humour and biased preferences for some philosophers over others. i started strong, suffered greatly, and got close but far too far from victory. now im obsessed with this system and with playing this game again!!!! curse you and thank you for making such an incredible game - i may be unlikely to be remembered, but for me, at least, this game will live on <3

I played this game via candlelight and paper. It was so evocative. I found myself buying into the setting, hoping against all hope that I could see the vault sealed, keeping the tomes within safe. I railed against the invaders, and ended up devising an entire backstory within a few paragraphs of who they were and how this had come to pass due to our own hubris. I cannot recommend this game highly enough. I've spent the better part of a day thinking non-stop about this game despite completing it. I now intend to write a few scenarios of my own and to find more of the Wretched and Alone series of games. Fantastic work - keep it up!

Oh my god I LOVED this game. The library setting was perfect for me and I really appreciated the delight and wonder that was always present in this game alongside the despair and fear, because of all the interesting discoveries you could make and all the magnificent tomes you could save. It wasn't all bleak! I felt like I got to build some sense of what my country was like beyond the library, its history and culture. I had a lot of fun, and would definitely recommend this game!

This was my first solo RPG ever. Actually it was one of my first RPGs ever, having only played a bit of DnD. I wanted to know what solo RPGs had to offer and with The Sealed Library I found a great experience. The theme really shines, was a great adventure, even if it ended poorly for me. But I learned that it's the story that matters. And that story will definitely stick with me. Definitely recommended. 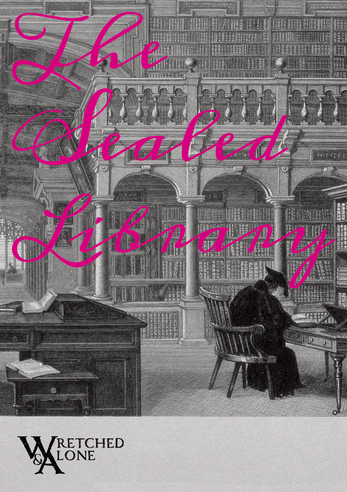 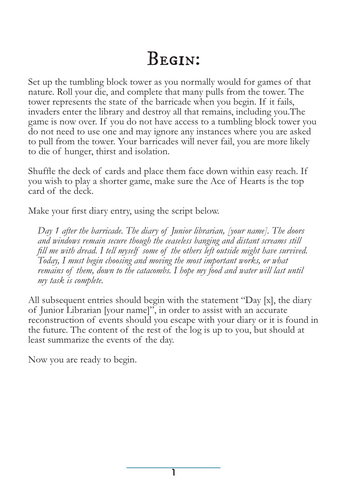